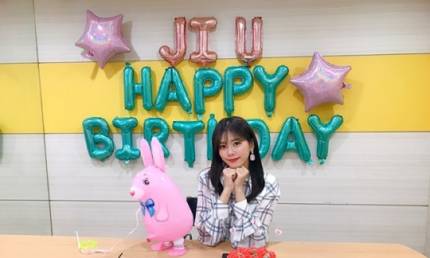 JiU of Dreamcatcher spent with fans a special eve of her birthday.

JiU communicated with fans via Vlive on the 16th. Singing a song with a birthday cake in front of her, she spent time with the InSomnias. Donning a bright expression, she made new memories with fans for approximately an hour.

In addition to communicating with fans, she prepared a surprise event where she called the other Dreamcatcher members. They solved quizzes about JiU. JiU also solved the problems with the fans and gave away polaroids.

“Being able to have a birthday party with fans through Vlive was a special time. Thank you all InSomnias for wishing me a happy birthday. Dreamcatcher and I will strive to improve further to repay the love you gave us.”

Dreamcatcher, the team that JiU is part of, is a girl group that debuted in 2017 with ‘Nightmare’. They are loved by K-Pop fans all over the world for their intense metal-rock sounds and performances that are reminiscent of boy groups. They recently finished the ‘Nightmare’ series and are preparing for a new challenge.

source: https://m.entertain.naver.com/read?oid=215&aid=0000772260
Please do not take translation without credit