“The cool and cool k-pop girl group DREAMCATCHER！The 4th Japanese single Eclipse is released on 3/24！Their 6th Korean mini-album is also on sale！”We are proud to show off who we have grown to be!”

Having visuals that surpass just cuteness, Dreamcatcher are the Korean girl group that demands the attention of the world with their heavy rock and bass sound matched only by their performances.  Dreamcatcher released their sixth Korean mini-albumDystopia: Road to Utopia and finished promotions on March 20th.  They then appeared on the internationally broadcast on YouTube K-Culture FestivalKCON: TACT3 where they showed off a forceful stage on the second day.  And on March 24th, they released their 4th Japanese single Eclipse.  The title track, Eclipse, was was downloaded 130 million times around the world.  It is also used as the theme song for the anime based off of the real-time 3D RPG Kings Raid (viewable on Terebi Tokyo on Friday nights at 1:23).  This is the first song of Dreamcatcher’s to be tied to an anime.  So now it is time to interview the Dreamcatcher that is getting increasingly more noticed in Korea, Japan, and the whole world!  This is full of their Korean promotion as well as the Japanese single.

――Including your single「ＮＯ ＭＯＲＥ」this is the third time that Dreamcatcher has been interviewed by KanStar! It is officially starting.  First, please give a greeting to the readers. 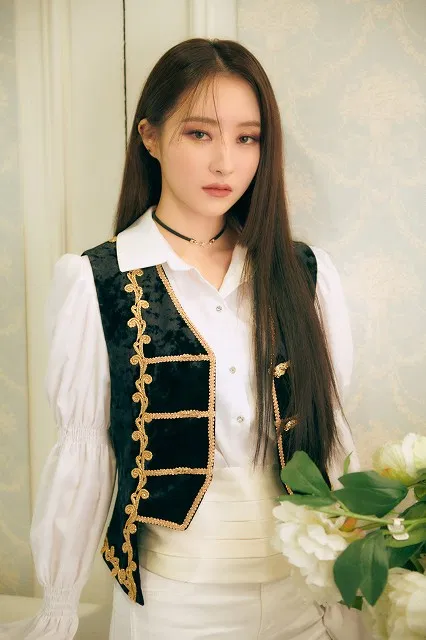 Siyeon: Hello, I am Dreamcatcher’s wolf of the stage, Siyeon~!

Handong:Ｃｈｕ！Dream of us~! Hello, I am Dreamcatcher’s ice princess, Handong.

Gahyeon: Hello, I am the lovely, apricot, youngest member of Dreamcatcher, Gahyeon.

――Dreamcatcher, you released a new mini-album on January 26th, having your comeback with Dystopia: Road to Utopia, completing energetic broadcast performances.  You were able to bring some energy to people feeling dark thoughts because of the Coronavirus.  How were activities?

Jiu: For this promotion, we sang our title song as well as the following song, Wind Blows, so it was a very full promotion.  I think the only way to have made this more perfect would have been to perform it with our InSomnias.  But we were able to fully prepare for it so I’m happy with our result.

Sua: I was really sad that we were unable to directly meet with our fans at all during this promotion but to hear that the performances I put my all into was able to bring even the tiniest bit of happiness to the fans makes me extremely happy.  The encouragement of the fans brings me daily happiness. 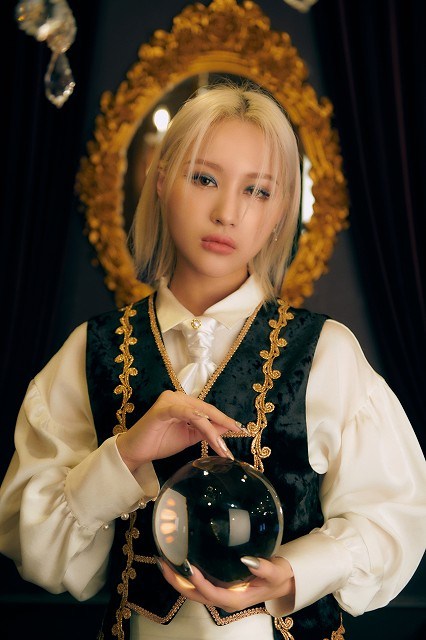 Siyeon: I was definitely sad to be unable to meet with the fans directly but I was able to stand on the stage feeling their force even from far away.  I’m very happy to be able to promote and overcome everything with my members.

Handong: Somnies, don’t be sad.  Don’t throw away hope because this will also pass!  Let us all wait and be healthy until the day we can meet!

Yoohyeon: First of all, I feel proud that we were able to show our growth from last time.  I’m certain we can keep growing and show even more even better performances, so please keep paying attention to us!

Dami: I was certainly able to feel the absence of the fans but I know they’re still watching so by thinking of that, I was able to stand on stage and be proud.

Gaheyon: It was really sad not being able to directly meet the fans but I was still able to feel their big love so I was happily able to promote this time.

Jiu: The album starts with the Intro having a worldly feel that one cannot miss.  Our title song, Odd Eye, focuses on finding the utopia that Dreamcatcher are on a trip to find with a cyber punk feel.  Wind Blows mixes that cyber punk with rock sound.  Poison Love expresses the dangerous side of dependent love and shows how it can get poisoned.  Next is the song that I participated in writing, 4 Memory.  Then the song that I think is perfect for listening to while on a drive on a spring day that Dami helped write, New Days.  Lastly, to round out Dreamcatcher’s sound, the album ends with the instrumental for Odd Eye. 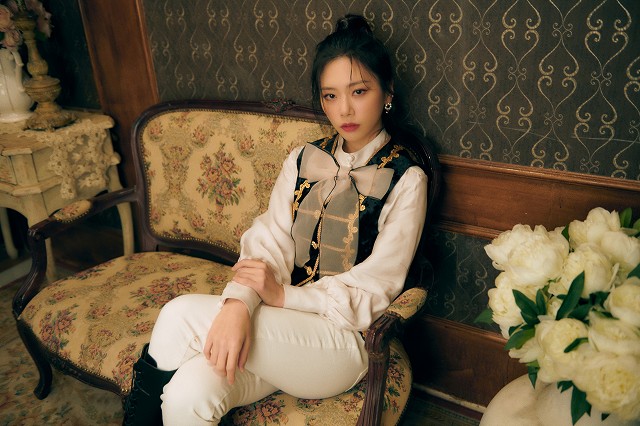 ――In Japan and Korea, the amount of time we have all been forced to spend indoors has greatly increased due to coronavirus which allows for us to all be listening to more and more kpop causing the groups to start working harder to shine even more.  I think that Dreamcatcher have been able to strengthen their place in the world with their amazing performances this time.

Jiu: Thank you very much.  The results from this promotion period were certainly very positive.  We were able to reach 1st place on some Korean music charts and even our bside tracks were also able to make it into the charts as well.  Our songs were even able to make it into the top 10 on music shows (haha).  I also think this is thanks to our fan’s support of us.

――What kind of song is Odd Eye？

Yoohyeon: Odd Eye has a strong rock feel featuring an almost poisonous melody.  I was very intrigued from the first time I listened to it because the intro has an almost oriental atmosphere to it.  The lyrics were finished on January 8th and they skillfully express the story of this album, “the absence of utopia”.

――Please teach us the key point of the dance.  Is there any choreography you hope for fans to copy this time?

Sua: In the chorus, there is the “Odd Eye Dance” done by holding your fingers under your eye to point out your odd eye.  It is the easiest part of the choreography to express the meaning of so I will be looking forward to seeing how the fans copy it.

――Please tell us what the highlight of the music video or any behind the scenes stories you may have.

Handong: This time for the music video, we had all seven members showing off seven types of beauty, skillfully using the dance performance to tell the story.  And a funny episode of the filming is that Yoohyeon was dancing so hard and got so into it, she tore her pants (haha).

――And your long-awaited 4th Japanese single, Eclipse, is released on March 24. What kind of song is the title song, Eclipse?

Dami: Eclipse sings the story of a sad fate of two people who have met only to become enemies.  Like the sad tale of how the sun and the moon can only be together during an eclipse.  The melodic piano and strong guitar rifts make a prominent metal rock song.

――This song is being used as the promotion song for the anime Kings Raid: Successors of the Will which is based off the real time 3D battle RPG.  What are your feelings on this?

Dami: It is a very big honor to us to get to sing an opening theme.  I want to participate in many more in the future!

――How was the recording? Your beautiful Japanese definitely conveyed the scale of the of such a magnificent anime game!

Gahyeon: Thank you very much.  We put in a lot of effort because we know the importance of singing such a famous opening.  I worked hard to be responsible for creating a song that would be able to grab all the viewers attention.  To be able to show off the joy and pain of Kings Raid in a good way makes me happy! 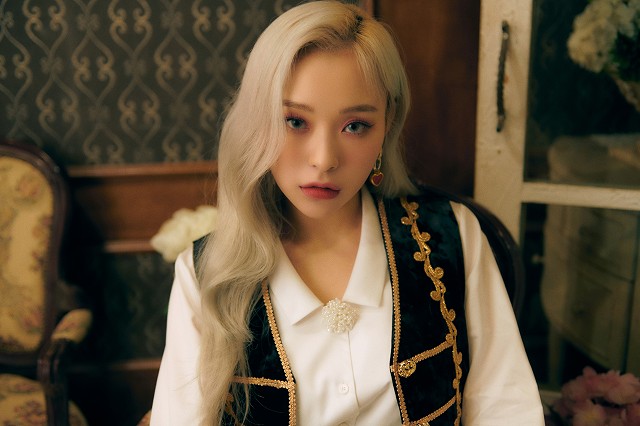 Gahyeon : Our last digital single was written by John Becker and he wrote this song at the same time because he became a fan of Dreamcatcher! He wrote this song just for Dreamcatcher.  The lyrics are a continuation of the world-view that No More has, fighting against the hate comments on SNS!

――A question about Eclipse.  There is the lyric “I want to be with you no matter the time. I pray to the sky”.  What is one thing each of the members wants or would wish to have if they could?

Sua: To always live to my best while doing what I want.

Siyeon: I want the door to anywhere from Doraemon.  Be able to go anywhere I want to be in an instant.

Handong: I would wish for coronavirus to go away even just one faster, letting everyone see the people they want to see and to live happily without illness. 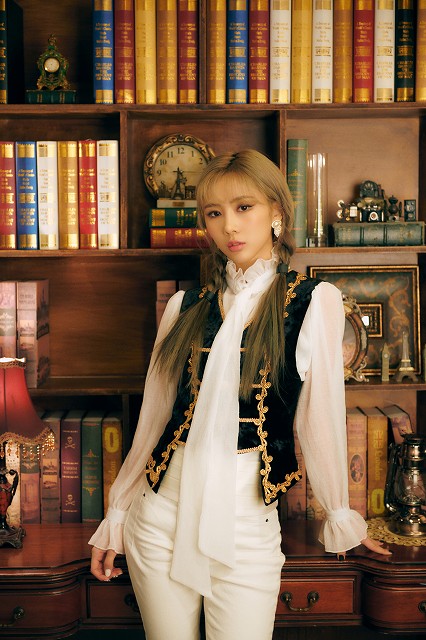 Yoohyeon: Hmmm….I would want for everyone, even the planet and the animals to be happy.

Dami: I want for everyone to never lack for anything.  There’d be no more pain, people would always have enough, and we could all exist in peace.

――Your last interview with KanStar was a big hit.  Please tell us a recent TMI fact about yourself [T/N: TMI is not used the same way in Korean. It does not mean to overshare in a gross way but to just talk about something that is insignificant to the person you are talking to].

Jiu: I have started to become interested in what I should eat to have a healthy body.  I also was interested in it before.  I have recently liked to eat steamed pumpkins and to eat/drink a collagen supplement before I sleep.

Sua: I actually have a new hobby I just got into.  It’s called bead cross stitch.  It’s really easy to stop thinking about the thousands of things happening and just focus on my work and I get really happy when I see my completed work (haha).

Siyeon: My interest in good smelling things has increased.  Be it a room diffuser or perfumes, I like to try them on myself (lol).

Yoohyeon: Hmmm….I have! I’ve been training myself to wake up early.  That’s why when we have no schedule, I go to bed at 11PM and wake up at 7AM! 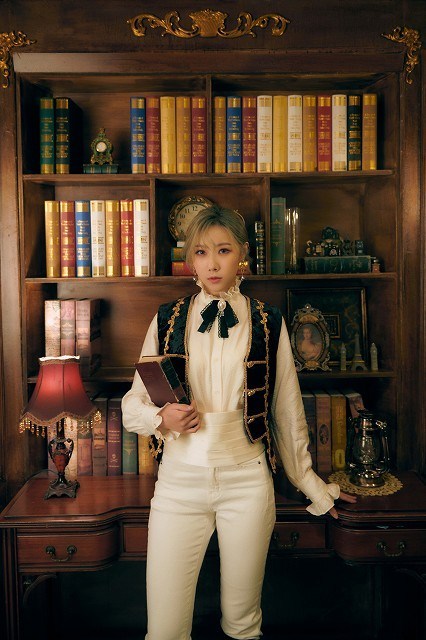 Handong: Recently, I’ve been wanting to go to the sea.

Gahyeon: Today is the fact that I did my nails for this interview!

――Lastly, please give a message to your Japanese fans!

Jiu: Somnies, I miss you so much!  You miss us too, right?  We miss you so much…We will definitely meet again! Because that day is going to come, please stay healthy.  Every one of you is precious to us so please take care of yourself. I love you ~♡

Sua: I really missed our Somnies while we were preparing our Japanese single.  I want to feel the breeze that can only be felt with you so I want the first of the month to come even faster.  Everyone, let’s keep moving forward.  Thank you!

Siyeon: It’s been such a long time since we’ve met…I want to see you so much.  You know that taking care of your health is the most important thing, right?  I know we are far apart but I want us to be each other’s strength.

Handong: I am always thinking of and missing our Japanese Somnies.  I am counting down the days until I can see you again.

Yoohyeon:「Thank you to all of our fans who have been waiting for us.  Thank you for your steady supply of concern and infinite supply of love!  The day we will meet is definitely coming!  Please wait a little more!  Please stay happy until then~ 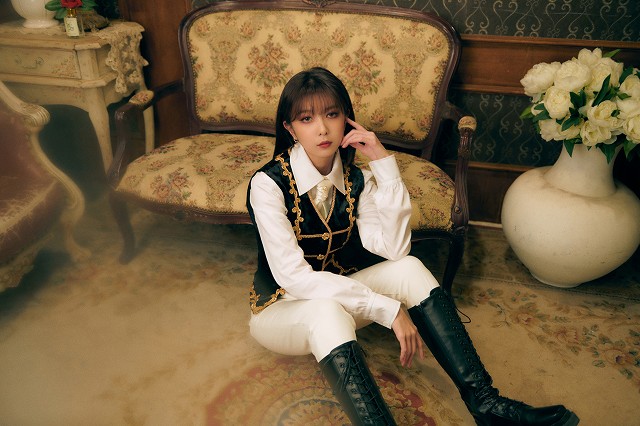 Dami: I am happy if our fans are getting happy and receiving strength from our music.  I think it would be great if we could all live with a  positive attitude and be happy.

Gahyeon: I always miss you, Somnies.  I love you and think of you as being important.  No matter where or when we all may be, I think we are all always in each other’s hearts, right?  I love you~