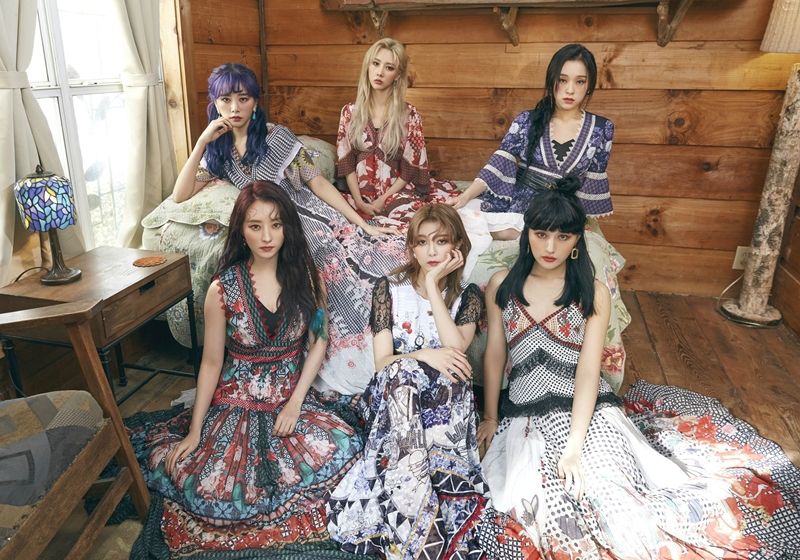 Dreamcatcher makes a comeback with their first studio album ‘Dystopia: The Tree of Language’ (Photo=Courtesy of Dreamcatcher Company)

“Dream of me!” the girl group Dreamcatcher greeted us brightly, beginning the interview. Their colorful hair, ranging from bright brown (Dami), grey (Yoohyeon), black (Gahyeon, Siyeon), vibrant purple (JIU), to reddish brown (Sua), seemed to tell us that their latest promotion had begun.

3 years after their January 2017 debut with ‘Nightmare’, Dreamcatcher releases their first studio album “Dystopia: The Tree of Language”, containing 14 tracks. We met 6 of their members, Dami, Yoohyeon, Gahyeon, Siyeon, JIU and Sua at Nonhyeon-dong, Gangnam, Seoul on the afternoon of the 18th, the day the album was released.

‘Dystopia : The Tree of Language’ is the album where Dreamcatcher begins their new world following the conclusion of their ‘Nightmare’ epic that they depicted since their debut. As one can guess from the title of the album ‘Dystopia’, they depict a world darkened by language scarred with wounds, telling a unique Dreamcatcher story.

Asked if they had thought about a Dystopia before, Siyeon answered “Dystopia is the antonym of Utopia, so it’s everywhere in our lives. Wherever people get hurt, that can become their dystopia, I think.”

Though the album was completed in just 4 months, in which they also promoted in Japan, Dreamcatcher was confident that the album would be satisfactory both in terms of ‘quantity and quality’. The album contains 14 tracks, including an Intro and an Outro, elements that have been in every Dreamcatcher album.

JIU said, “We were sad that the number of our songs was limited because we only released digital singles or mini-albums. We’ve been called a ‘B-Side powerhouse’ because we make our B-sides high quality too. This album, I think, is satisfactory in both quantity and quality. The InSomnia will be satisfied too. It reminded me of all that the members went through in the last 3 years.”

“We all got a chance to work on the lyrics, and through hard work, 4 of us got to participate in the album. I think I’ve learnt a lot about writing lyrics. It also made me realize again how different our worldviews and thoughts are. Even with the same topics, we came up with different results. I wanted us to release a song produced purely by ourselves. That would be fun,” Siyeon said.

The lead track is track number 2, ‘Scream’. ‘Scream’ is a track that incorporates electronica sounds on a rock basis. The lyrics employs middle age witch hunts as the motif, and the actual scream in the track makes it memorable.

JIU said, “The beat goes like, ‘dududu du!’ and continues like that, so the first thought I had was… “oh, the dance is going to be hard. The choreography is going to be hard,” laughing. Yoohyeon said, “There’s a scream inserted in the middle, and I wasn’t sure if I heard it right. Unique elements like that left a strong impression on me.”

After mentioning that while Dreamcatcher has become known for their performances and their concept, they had not had many dance breaks, Sua said “The song reminded me strongly of a battlefield. We could beat anything! Something like that. It felt good because it felt like we were continuing to evolve,” voicing her satisfaction.

“Our members have a clear idea of what they want to do, so they are vocal about it,” Sua began, adding that “With this lead track, we clearly said that we wanted a very tight choreography, and we think the choreography turned out as well as we wanted.”

The lyrics, which say “As my two tied hands ache / even as everyone throws stones at me / I can’t escape / It’s not fun at all for me / Someone tell me for whom this is Tell me/ Above the blazing flames Now / Please I don’t want to scream” have a certain weight to them that is difficult to dismiss.

JiU explained that “A witch hunt is about lots of untrustworthy words coming together to trap one person in a corner, into a tight spot. Since we are entertainers, words like that – rumours – can abound. Not just us, even little children who are still in school are often hurt by words. Our message here is to be careful about that.”

Asked when Dreamcatcher had similar experiences, ‘yes’ said Gahyeon, adding that “Since we can’t meet our fans too often, we try to communicate with them however possible.” Yoohyeon said, “We do run into a lot of them (hate comments) during vlives, but you can’t always be happy in life,” making both the reporters and the members burst out laughing.

Sua said, “We get more positive comments than posts like that.” JiU added that “The fans are good about reporting hate comments. Then, I realize that ‘ah, there are people on my side’.” 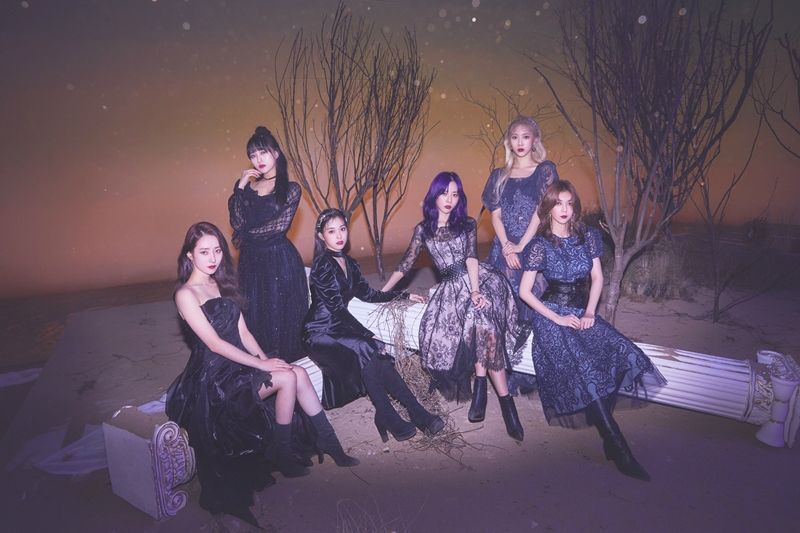 Dreamcatcher is among the most well-defined teams in terms of musicality and concept among the currently active idol groups. They continue to present young metal tracks based on rock sounds, while their intense ‘Nightmare’ concept and world-building draws the curiosity of fans, giving them the pleasure of interpreting their story.

Asked if the well-defined image associated with ‘Dreamcatcher’ was worrying, Siyeon said “People know our concept and that we do metal, and they expect more from us because of it. Those expectations drive us to work harder.”

JIU, in a brave tone, said “There was a time when our company staff was in a dilemma, but we thought if we backtracked after continuing down one style so far, we would end up going nowhere. Mass appeal is important, but continuing to build up our style is more important. If we keep going our way, they (the public) will notice us.”

As well-defined concepts and world-building are becoming more common among idols, we asked if Dreamcatcher felt like they had contributed to this trend. The members answered with laughter. Sua said, “The trend these days definitely seems to be more about girl crush and being cool.” “I think we read the trend early on. I’m sure the public will warm up to the rock genre eventually,” she added.

JiU said, “Musicality in Idol groups will continue to get higher. Doing world-building means that they aren’t following someone else, that they are building a story of their own. So I think it’s a great development.”

Dreamcatcher has returned time and time again with new tracks and performances since 2017, refusing to take long breaks. They finally released their much-awaited studio album, and they successfully concluded their tour of such countries as Korea, Japan, Indonesia, Singapore, Philippines, Malaysia and Brazil. Asked what they wanted to achieve through this album, JIU answered “Beastly idols! Beastly idols that would feel at home on a safari!” causing us to laugh.

“First, we want to tour the country. Touring Korea is a sign that we as a team are popular in Korea and that the public recognizes us, so we really want to do it! I also want our album on the Billboard album chart. That would be a sign that our studio album is being recognized world-wide.” (JIU)

“The fans often say, ‘Dreamcatcher did Dreamcatcher’. I think of it positively, that our image is leaving an impression. I want to hear ‘ah, as expected of Dreamcatcher’.” (Siyeon)