Last September they released their 1st album “The Beginning Of The End” which concluded their “Nightmare Story” concept that they had been showing off up until this point. Their new track “Endless Night” will start their 2nd story and was worked on by guitarist Kuboty (ex. TOTALFAT). The song still showcases their intense rock sound.

DREAMCATCHER’s music has very strong hard rock and heavy metal elements. Do you guys listen to this kind of music in your day-to-day lives?

Siyeon: I love that hard band sound. I think ONE OK ROCK is the best in particular. When they held a concert in Korea I bought a ticket and went to see them by myself. They really make you scream “WAAAAA!” and wave your arms in the air. Thanks to them I sweat a lot too (laugh). ONE OK ROCK is really popular in Korea too. Because they have an intense sound.

JiU: Since the beginning I’ve always liked the mood that acoustic songs give off, but since joining DREAMCATCHER I’ve wanted to experience more intense rock. So I started by watching videos of BABYMETAL and I’ll never forget how surprised I was. I was shocked, they were so…fresh. I thought it’d be great to be cool like them.

Dami: I didn’t really specialize much in metal, but I’ve probably listened to a lot of rock bands. Even though you can say ‘rock’ in a word, aren’t there also ballad and hip-hop elements that can make more intense rock? So I can easily listen to those things.

Yoohyeon: I don’t really listen to much rock or metal. However, I do listen to WaT a lot. I like Koike Teppei. But WaT has a nice tight band sound, so they’re easy to listen to.

Gahyeon: Well, I suppose I like Day6. They’re a group with a band style that’s unique in K-POP.

SuA: Day6 has gotten popular among the youth in Korea. Are the youth in Korea listening to rock in the first place? Because there are a lot of R&B and EDM elements in K-POP.

Siyeon: I think there are a lot of people that listen to it. Anime has gotten really big there. “NARUTO” and other anime song and soundtracks are mostly rock. Personally when I listen to anime songs I feel a little nostalgic.

Having a concert with a band someday

In Japan “hard rock & heavy metal” is a genre that has a pretty consistent fan base. Some of them have probably never listened to K-POP. How do you want to show the appeal of DREAMCATCHER to those people?

JiU: For people that don’t know us, I’d like for them to listen to “PIRI” first. That’s because “PIRI” is addictive and the hook gets stuck in your head. Even when we perform it abroad, everyone simultaneously starts singing it loudly. So I think “PIRI” is the best introduction to DREAMCATCHER because it really brings a sense of unity.

SuA: I recommend “Mayday”! We made a special video clip for this song. We recruited people who had experience in a band and they performed together with the members. The live session in the studio was completely different than how it usually is and the intensity was amazing! You should be able to see us scream-singing in the video.

SuA: We performed with a band set at a rock festival once. Aside from that, there’s not many other times. If I could have a wish granted, I would like to have a band style solo concert.

Gahyeon: Yeah, that’s a really big goal of ours. DREAMCATCHER had a world tour and went to places like Europe and America. Did anything unexpected happen while you were travelling through different countries?

JiU: During the first day of our second European tour in London, I got really impatient because I couldn’t hear my voice in my in-ear monitor. When you’re on stage and you can’t hear your voice, it makes it very difficult to sing. Unfortunately we had to delay the show by an hour even though our fans were waiting outside in the cold rain…

Dami: And even after we started the show, the condition of the monitor was still bad.

JiU: I was really anxious about it at the time, but somehow with willpower I got over it.

SuA: When I look back, getting through those troubles brought the members closer together and gave me the confidence to fight through problems.

Siyeon: Something really touching happened during our recent American tour. We have a ballad called “Polaris”. When we sang that song our fans put star shaped stickers over their cellphone lights and shined them at us. It was a romantic scene, because the meaning of our song is the North Star. I REALLY thought I was going to start crying. Yoohyeon: Also, one of the most regretful things is that our member Handong wasn’t able to participate in the European or America tours. So our fans brought life-sized cutouts of Handong to the venues.

Dami: I was really surprised by that. Our fans’ feelings are amazing. So we brought the life-sized Handong cutouts up on stage.

Which country did that?

Gahyeon: Several countries. That’s because fans from different countries prepared their own life-sized cutouts. So each place had a different Handong. The sizes were different as well. I was touched that they did this by hand…

SuA: Also, the characteristics of fans varied from country to country as well. There were a lot of female fans in Europe. In Helsinki, Finland the ratio of female to male was like 8:2. In Korea the ratio is closer to 5:5. What kind of characteristics to Japanese fans have?

JiU: They’re SO polite. For example, in other countries when we have a hi-touch event the fans are like “Yaaay!” smiling brightly and then abruptly try to hi-touch. In Japan, our fans bow first and then will hi-touch. We have mutual respect with our fans and I think that’s ideal.

Yoohyeon: When a show starts and we start singing on stage, they look at us very seriously. I wonder if that’s a unique trait to Japanese fans.

Siyeon: Surely. Their reactions are also really great. Like they’re moved by what we say on stage. You will be releasing your new single “Endless Night” on March 11th.

Siyeon: This is our first work since the release of our album “The Beginning Of The End” last year. It closed out our “Nightmare” story concept. In short, this single is the beginning of a new story. The specific concept of this story is still a secret, so I’ll leave it up to your imaginations. Please look forward to it.

Kuboty, former TOTALFAT member, offered the title track “Endless Night” to you all. Is this your first time having a Japanese composer?

Siyeon: No, we also have “My way ~Kono Michi no Saki e~” (from our album). So we’ve worked with Japanese people before.

Yoohyeon: But, this will be our first time for a single.

JiU: When I first heard the song, I was like “This is intense”. Our sound has been heavy and hard from the beginning, but this seemed to go even further. The best as usual

I think a main point is that the lyrics are in Japanese. In a previous interview with you guys you stated, “We’re still shaky at Japanese pronunciation, so kindly watch over us”, do you think you have grown since then?

Siyeon: We’re studying Japanese and thanks to work we’ve been given more chances to use it. When we come to events in Japan we’re able to speak more with our fans.

SuA: All of the members should have gotten better since before. I want to show how much we’ve grown. Speaking of which, what is the latest Japanese that you’ve memorized?

JiU: “Doushite” (why?). “Doushite ~kimi wo suki ni natte shimattan darou?” (Why did I fall in love with you) is a phrase in Tohoshinki (DBSK)’s song. It won’t get out of my head. The meaning is great, but I simply just like how it sounds.

Yoohyeon: For me it’s “yareyare……” (omg…). I started watching “The Disastrous Life of Saiki K./ 斉木楠雄のΨ難” on Netflix and the main character says “yareyare…” a lot. It got me completely (laugh).

Siyeon: For me it’s “ANKEETO” (questionnaire). I took questionnaires from everyone during our fanmeetings. Asked things like, “What is your favorite DREAMCATCHER song?”. So, I memorized the Japanese for questionnaire.

Gahyeon: Since it’s winter right now, I’ve recently learned the word “yuki (snow)”. My birthday is in February, so I love the winter and snow.

Dami: While listening to Gahyeon speak just now, I learned the new word “Fuyu (winter)”. I’m proud I could put it to use (laugh). Indeed (laugh). Please share a message for your fans.

Gahyeon: Our Japanese fans! We can’t wait to see you again. We’ll prepare extra hard to show you guys a great version of ourselves. Aishiteru yooo (I love you)!

JiU: We received SO MUCH power from you guys last time we were in Japan. After that we were able to return to Korea and work energetically. We’ll continue doing our best, so please look after us! 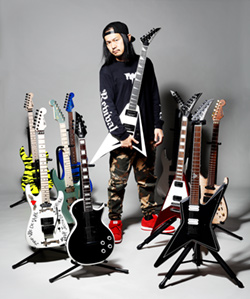 The theme of this song is to fight against and overcome your difficulties. The message is to continue down a path you believe in. This theme also applied to me as I had left a band I had worked with for 15 years in order to continue on my own and restart as a musician. It’s DREAMCATCHER’s song but it overlaps with my own feelings. It ended up being a powerful song in the end.

Things you thought about while working on this song

I thought that a live groove was necessary to bring out more of DREAMCATCHER’s heavy sound and worldview. So we got coldrain’s drummer Katsuma to participate as the band has played on stages throughout the world. With that, I was able to get the sound that I wanted. I am grateful to Katsuma who participated despite his busy schedule.

A Message to the members of DREAMCATCHER

I’m rooting for DREAMCATCHER from the bottom of my heart so that they can have even more activities. I’d like to perform on the same stage as them one day. Keep working hard!