The group Dreamcatcher has made their return with their first full album featuring a new world. They said they were confident that the album had great songs, great choreography, and great costumes, and hoped to be able to raise their recognition domestically as well as internationally.

At 6PM on the 18th, Dreamcatcher released their first ever full album ‘Dystopia: The Tree of Language”. Before the album was released, a reporter met them at a coffee shop in Nonhyeon-dong of Gangnam, Seoul.

Dreamcatcher members appeared excited as they entered the interview venue. The leader, Jiu, said “this is the first full-album we are releasing in 3 years,” adding that “This is an album we’re satisfied with, and since it’s a studio album, there’s a lot of songs for InSomnias to listen to. I’m proud as a singer.”

The album is fully loaded with 14 tracks including the lead track, Scream, an intro, and an outro. The album includes previously released fan songs and the solo track of member Siyeon, while being diverse genre-wise, making for a stimulating listening experience.

Most notable, however, is the fact that this album will serve as the starting point of Dreamcatcher’s new world. After concluding their ‘Nightmare’ story which they have told since their debut last year, Dreamcatcher now depicts a world darkened by language scarred with wounds.

This is both a fantasy story and a reflection of the world we currently live in. “We tried to embody the joy and sadness that comes from words such as the hate-comments that have become a social issue.”

What thoughts does Dreamcatcher have about hate-comments? “We also get hate comments,” Yoohyeon, said, confessing that “though I don’t go looking for them, when I run into them, I remember them from time to time despite trying to ignore them. It’s hurtful.” 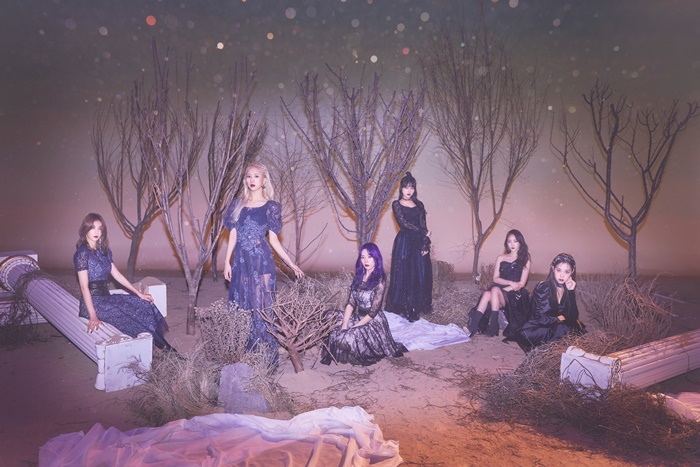 Dreamcatcher is known for music that incorporates strong story elements, but they are also loved as the girl group that turns in especially powerful performances. They told us that they worked hard to make their performance for the lead track exciting.

For the first time, dancers will accompany the group in the ‘Scream’ performance. “This time, we have dancers and we do solo performances as well as group dances. I want to hear that Dreamtcher reached the peak in terms of performance,” Dami hoped.

Sua said “I developed arthritis in my wrists” as she explained how the group prepared for the album, saying “I resolved not to be weak on stage. If the dance gets weaker, the stage feels flat and people may think that we’re phoning it in. So I knew we had to show off what we could do.”

They told us that the album contains messages that people can relate to. “Our B-side track ‘Tension’ is one I want to give to people who are fixated on doing a perfect job in their companies, for instance. The message is that even if you aren’t perfect, you are doing just fine right now,” JIU said.

Dreamcatcher hoped their album they have so much confidence in would help them raise their recognition domestically and score well on the charts. While Dreamcatcher is popular overseas, as seen in their successful world tour of last year, their domestic popularity leaves a lot to be desired.

JIU said “I want us to enter the top 10 in the charts,” while Gahyeon said ” I want more people to recognize us on the streets, and I want less people to say “who are they?” when we are busking and such.” Dami said “I want our performance to gain word-of-mouth repute.”

Going forward, they also hoped to be able to meet fans with more performances and shows. “This is a studio album with many B-side tracks, so I want to do a follow-up promotion,” Siyeon said, with Gahyeon saying “My dream is for us to perform at a large venue with a lift in it.”