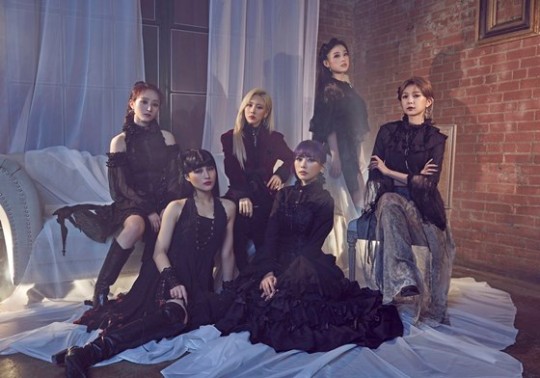 Dreamcatcher (Jiu, Sua, Siyeon, Handong, Yoohyeon, Dami, Gahyeon) returns with a new album with a statement to make about society.

Dreamcatcher explained their new world in an interview to commemorate the release of their 1st full album ‘Dystopia: The Tree of Language’ held in Gangnam, Seoul on the 17th.

Dreamcatcher has run with their ‘Nightmare’ concept since their debut in 2017 and concluded the ‘Nightmare’ epic with their fourth mini album, “The End of Nightmare”, released February last year.

The first full album ‘Dystopia: The Tree of Language’ released on 18th is their 1st full album that introduces the new story following the ‘Nightmare’.

The album employs the ‘anti-utopia’ as its topic and is more societal than the ‘Nightmare’ series, as it depicts a world darkened by words, such as hate comments.

“In today’s world, people can get hurt from a comment or feel happy from reading a good post. We represented this through the tree and its fruits,” Dreamcatcher said, explaining the world of the album.

Why did Dreamcatcher choose to incorporate social commentary for their comeback following the ‘Nightmare’ series? “There are already a lot of songs about love and breaking up. Our fans want us to be different, both in terms of lyrics and images.” “So we thought about what story we would tell, and after choosing hate comments and language in general as the topic, we had to start building an expansive world,” Dreamcatcher answered.

The subject of Dystopia may seem rather profound. However, Dreamcatcher said ‘Since malicious comments and words are a common theme, we think many people can easily relate to it’

“Due to our profession, we get hurt a lot from words. We are  sure a lot of people will empathize and will be more careful about what they say as they listen to our song,’ Dreamcatcher added.

Meanwhile, Dreamcatcher released their 1st full album ‘Dystopia: The Tree of Language’ on various music sites at 6PM on 18th.

The album contains a total of 14 tracks, including the title track ‘Scream’, the ‘Intro’ and the ‘Outro’. ‘Scream’ is a rock-based song with electronica sounds which uses the ‘Witch Hunt’ as its motif.